Hi there! I’m Yan, a developer of Marta. It’s a nice file manager for macOS, try it out! :)

Over a year ago, I posted the first blog post here and released Marta 0.1. I’m really glad lots of you liked Marta, and the feedback you provided over the year was highly valuable. Of course, it wasn’t a one-way communication: a lot of features added since the initial release was actually proposed by users. Now Marta has a small but very warm community, and I want to say: “Thank you!” to every user. ❤️

I also want to thank Radio-T, a Russian tech podcast, for putting in a word about Marta in one of its releases. I was happy to hear kind words about the app I put so much effort into, not mentioning the fact that the user base increased significantly 😄. Don’t hesitate to thank software developers for their products. It’s really heartwarming!

But this is not just a “Thank you” blog post. I have some good news.
With the release of 0.5, Marta goes beta! 🎈

What does this mean to the users?

Marta became mature enough to be used as a tool for everyday work. It’s a way more stable than a year ago, and I use it all the time. Beta doesn’t mean release quality though, so I don’t recommend using it in safety-critical environments like in a operating room, or in a nuclear reactor. Please wait a bit more 😉.

The beta release also means Marta got closer to 1.0. As I said a year ago, Marta will eventually become a paid product. I put a lot of effort into creating it, and I would be glad to get some kind of compensation. But the license will be very affordable, and I clearly state it won’t be a subscription. Because I want to own what I pay money for.

I also say I’m not thinking of Marta as a startup. The goal for me is to create the best file manager for Mac, not to become rich. As a developer, I’m the most active user of Marta, and, to be honest, I’m very picky. I’d rather spend a lot of time making an awesome product than just push a half-baked prototype and tell everyone: “Hey, I want your money!”. That’s why Marta is still in beta, although it already has a number of unique features. I just don’t like potboilers.

The major version release means there’s something new to try. And Marta 0.5 brings a bunch of new features indeed. As always, you can see the whole list of enhancements in the changelog. Here I will highlight only the most important ones.

Marta 0.5 introduces the operation queue. When you run a long-running task like copying a huge directory, the task is put to the queue and executed asynchronously. Of course, you can submit more than one task, and they will be executed in sequence. 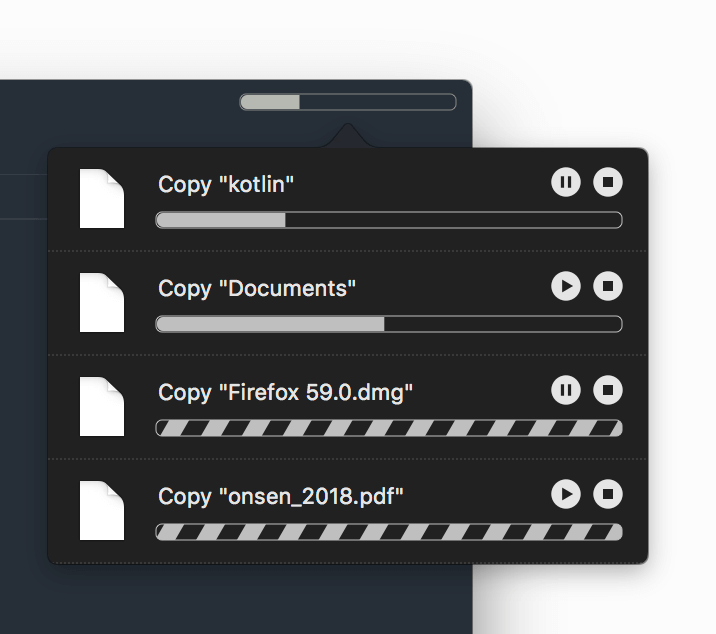 Operation queue is designed to be fully accessible with a keyboard. Just press = to open the queue, P to pause the selected task and A to abort it.

Later it will be possible to reorder the task queue or run multiple tasks at the same time.

The new version of Marta introduces read support for a number of archive formats besides zip, including, but not limited to tar, bz2, rar, xar, iso out of the box. Not only you don’t need to use the archive extraction software anymore, you can also explore nested archives!

Now you can add Marta actions that run external tools without writing a plugin. Such actions are called gadgets: they behave just like the built-in actions, and you can bind a hotkey to trigger them. In 0.5 there are two kinds of gadgets: an application runner, and a binary executor.

Gadgets are configured in conf.json. Here is how you can add a gadget that opens Sublime Text with the selected files:

Or to init a Git repository in a particular directory:

Read more about gadgets in the documentation.

You can download Marta 0.5 here. If you already have the previous version of Marta installed, just select the “Check for updates…” item in the application menu.

Please share your feedback! If you have any feature request, or if you encountered a bug, please file an issue, or just send an email to me.

Have a sunny Marta! ☀️