Did you ever think about what application you use the most on your computer? Probably it’s the web browser or some tool you use for work, like the text processor or the IDE. But it’s hardly the only app you see regularly. Despite the popularity of web services, lots of people still use desktop applications for playing music, keeping notes and messaging because native apps have the way better user-experience than any website.

The good example of the native application is a file manager: every desktop system comes with some file browser preinstalled. But the system apps, although being simple and well-designed, are limited in functionality. They perform well with the basic tasks but are clearly insufficient for power users.

So it is not surprising to have a variety of third-party file managers, especially the dual-pane ones as they are extremely easy to operate using the keyboard. Though, for some reason, most of the good options are Windows-only. Besides the well-known Total Commander, there are FAR, Double Commander and many other feature-rich applications, but when it comes to Mac, the number of variants significantly decreases.

I tried almost all the options available for macOS, and none of them was good enough. The main problem was the lack of extensibility: you have nearly no options to tune. The one that I used before even hadn’t a way to configure the font of the file list. Can you guess if any of them support plugins? ;)

But the poor extensibility is not the only thing I was irritated about. Almost all Mac apps of this category are very slow. They have all the fancy toolbars and amazing animations, but all this makes no sense if it takes a notable time just to enter the directory. I may sound like a snob, but if it is your tool, you expect it to be fast and stable. Just imagine that your text editor has a lag on typing, and you will understand me.

How about the cross-platform applications?

People like cross-platform applications as they allow them to have the consistent behavior on all platforms. The good example is Sublime Text: its authors did a great job of making the new cross-platform GUI framework, so no matter what OS I use, I have the familiar environment that looks native.

But the problem is that I don’t use anything but Mac for years. It’s good to know that some tool I use is available also on competitive platforms, but it will never become the selling point for me. The much more important thing is the OS integration, and, as a software developer, I clearly understand that portability doesn’t come for free.

Each OS has its own rules of how file browsers should behave. For example, on Mac, each downloaded application is marked with a “quarantine” attribute, and the app just won’t run unless user accepts the potential risks. It’s easy to forget about such platform-specific things when making a cross-platform application. In fact, none of the apps I tried supported quarantine.

I tried lots of different file managers and didn’t find a good one. Then I waited for around a year and a half hoping that someone will create it one day or at least some of the existing applications will become better. Nothing changed. So I created Marta.

As you might have guessed, Marta is the new dual-pane file manager. It’s the native macOS application with minimalistic design. Of course, Marta is not as powerful as “monsters” like Total Commander (and probably never be), but it already has all the features I use every day, and it works amazingly fast. 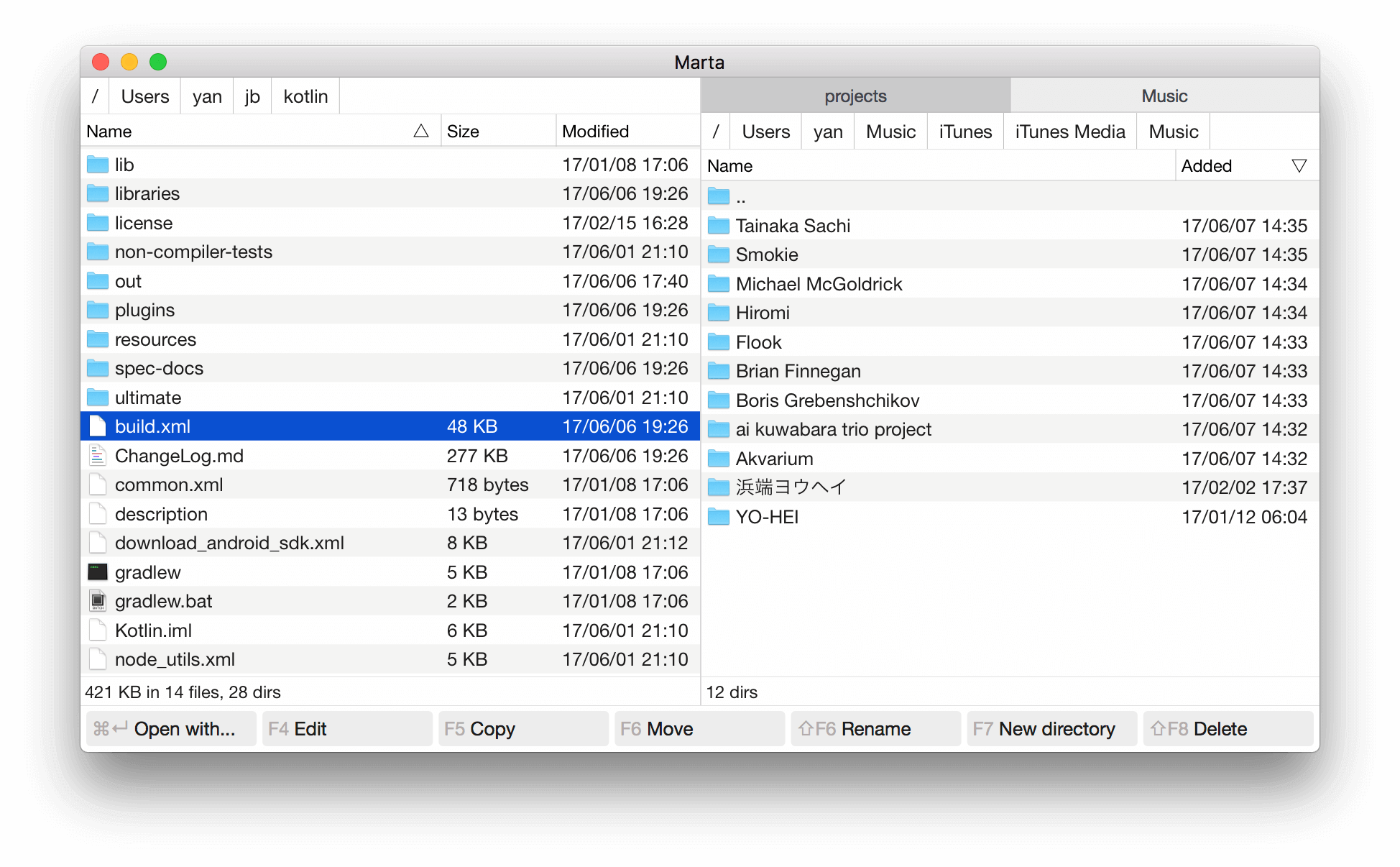 By default, Marta has the “traditional”, nc-like, hotkeys, but of course, they are configurable. Moreover, you can bind an action to multiple hotkeys, or share the hotkey with the several actions. If more than one action will be applicable, the action menu will be shown.

Marta supports plugins. You can read the detailed information about how to write your plugins here, the examples are available on Github. In fact, all the bundled actions are built with using the provided API, so, as a plugin developer, you will have nearly the same capabilities as me.

Marta is in its early alpha stages right now, but all the basic features are already implemented. I’ve already used Marta for some time and have no critical issues, so I decided to publish it to collect some initial feedback.

Marta 0.1 is available as a closed alpha. Click here to get the invite.

So what’s the price?

Marta will eventually become a paid product. It means that in a time of the 1.0 release, the license model will be introduced, and I ask you to buy the license to use Marta indefinitely. But the price won’t be high as I have the strong feeling that the essential tools like file managers should be affordable. And, of course, the license will be perpetual.

Anyway, Marta will stay completely free until the release. Feel free to use it :)

The main reason for publishing the preliminary version of Marta is to get some feedback. Even if you think the app is worthless, I’ll be glad to hear the constructive critics.

It’s impossible to implement all the features at once, so I’ve made a public to-do list with the features planned for the upcoming updates. Don’t hesitate to vote for the favorite ones using the comments or suggest the features that aren’t on the list yet. Your feedback may significantly affect the task priorities.